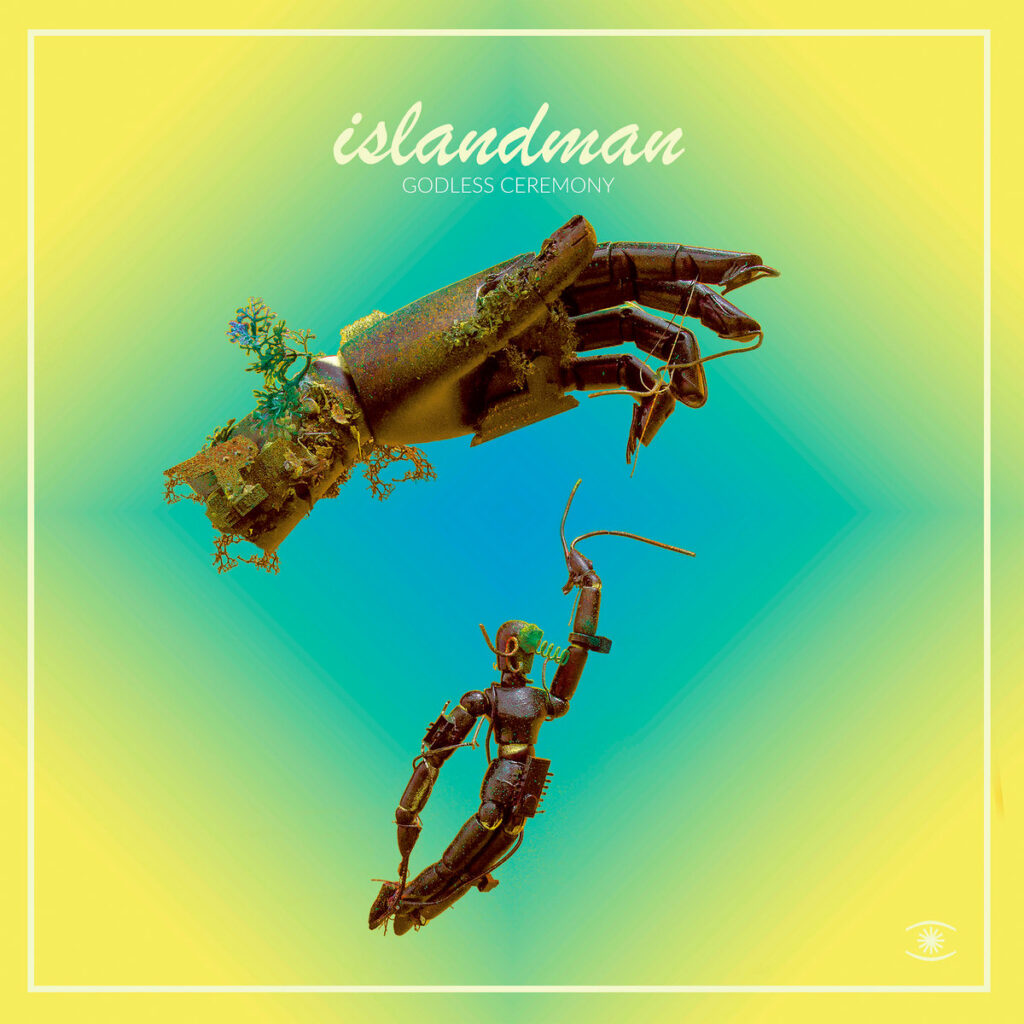 The brand new Album by islandman is out now in all digital stores.

All eyes are on Islandman, an interplanetary musical trio from Istanbul who release their long anticipated, third album Godless Ceremony on September 10 via Danish imprint and long-time home of the band, Music for Dreams.
Islandman makes an incendiary, uplifting and psychedelic slew of music drawn from a world of make-believe, rooted in Anatolia. These 10 tracks (+ 3 additional exclusives on the vinyl) – all of which flirt with balearic, house, down-tempo and electronica with a global gaze – are awash with acid drenched electronic motifs and stuttering electronic drum machine syncopations. The group effortlessly sail the globe, dropping into the tropics of Ecuador (Amarnos Ahora),to Mali visiting North African desert blues masters Tamikrest (Tarhamanine Assinegh) and North India (Drums Of Colca) whilst never forgetting the music and poetry from the band’s spiritual home, Anatolia (Kara Toprak).
In Godless Ceremony we are withdrawn from time and place, delivered to a fantasy zone, dreamt up in the sea, gazing at the stars. It’s a musical storyboard, that whilst conceived in Istanbul by producer, singer and multi instrumentalist Tolga Böyük, journeys to far off places, real and imagined.
Hindustani tablas, Tibetan flutes, flamenco guitars, Anatolian Saz and Balinese (Bhasa) vocals all mesh within a concept (and coping mechanism) that contemplates daily routine as beautiful and meditative and as Tolga has appreciated over a testing two years in which he lost his father,”You can take part in a religious ceremony, search for supernatural powers, but sometimes you need to find happiness in small, everyday things”.
The record’s tracklisting and flow, like it’s production ambition and aesthetic, peaks and troughs and arguably perculates at the Underworld-esque title track Godless Ceremony, where Tolga takes front of stage delivering the lead vocal and playing the Saz, an Anatolian stringed guitar-like instrument.

Previously released as a single is Kara Toprak, originally a folk song by Aşik Veysel from Anatolia and exceptionally popular in Turkey, it’s a collaboration with Danish guitarist Jacob Gurevitsch. Tolga trips to Bali (singing Bhasa) in Aku Membawa, a house groove (already played on Pete Tong’s BBC Radio show) which was produced in collaboration with DJ DIVO, OliO & Music for Dreams label boss, Kenneth Bager. Tarhamanine Assinegh is a co-production between North African desert blues protagonists Tamikrest and Islandman, with Islandman reconstructing the song, perfectly fitting with their mission as contemporary cartographers. Drums of Colca splices the tabla and Hindustani tradition from India (it’s actually two separate tabla recordings mixed together) with electronic accents whilst incorporating the mouth harp from Mongolia and Tibetan flutes. The guest collaborators are Troels Hammer & Ole Theill. Istanbul Lockdown was originally recorded for dance music giant Boiler Room, as an exclusive as part of a lockdown broadcast. Made in Istanbul, with live strings and Turkish clarinet, it brings back difficult memories for Tolga, having lost his father around the same time.

The core members of Islandman are multi-instrumentalist & producer, Tolga Böyük and Eralp Güven (percussion) and Erdem Başer (guitars). Islandman have become known for their live performances, as anyone who has witnessed their live streams from Istanbul for the London Jazz Festival and Boiler Room can attest to.

Islandman simply avoids boundaries and Godless Ceremony is ultimately their most open-minded work to date. The subtleties and deft electronic touches bewilder and their clear appreciation of music on a global level is an education for us all.
credits